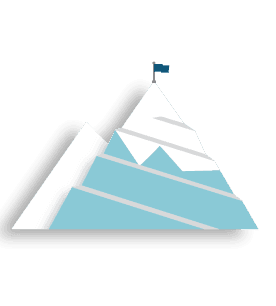 BHAG is a concept developed in the book Built to Last. A BHAG (pronounced “Bee Hag,” short for "Big Hairy Audacious Goal") is a powerful way to stimulate progress. A BHAG is clear and compelling, needing little explanation; people get it right away. Think of the NASA moon mission of the 1960s. The best BHAGs require both building for the long term AND exuding a relentless sense of urgency: What do we need to do today, with monomaniacal focus, and tomorrow, and the next day, to defy the probabilities and ultimately achieve our BHAG?
Media and Articles
Video
Expand +
BHAG Question #3: How Can You Reframe Failure As Growth, In Pursuit Of A BHAG?
Articles
Expand +
Aligning Action and Values Best New Year's Resolution? A 'Stop Doing' List BHAG – Big Hairy Audacious Goal Building Companies to Last The Wizard, King, and Hobbit of Business
Excerpts from Built to Last

Put yourself in the shoes of Boeing’s management team in 1952. Your engineers have the idea to build a large jet aircraft for the commercial market. Your company has virtually no presence in the commercial market and your earlier commercial attempts have been failures. You’ve been building aircraft primarily for the military (B-17 Flying Fortress, B-29 Superfortress, B-52 jet bomber) and four-fifths of your business comes from one customer—the Air Force. Furthermore, your sales force reports that commercial airlines in both the United States and Europe have expressed little interest in the idea of a commercial jet from Boeing. The airlines have an anti-Boeing bias—a “they build great bombers, period” attitude. No other aircraft company has proved that there is a commercial market for jet aircraft. Rival Douglas Aircraft believes that propeller-driven planes will continue to dominate the commercial market. Your company still has memories of the painful layoffs from fifty-one thousand employees down to seventy-five hundred after the end of World War II. And, for the clincher, you estimate that it will cost about three times your average annual after-tax profit for the past five years—roughly a quarter of your entire corporate net worth—to develop a prototype for the jet.

What should you do? If you’re Boeing’s management, you defy the odds and commit to the audacious goal of establishing yourself as a major player in the commercial aircraft industry. You build the jet. You call it the 707. And you bring the commercial world into the jet age.

Like the moon mission, a true BHAG is clear and compelling and serves as a unifying focal point of effort—often creating immense team spirit. It has a clear finish line, so the organization can know when it has achieved the goal; people like to shoot for finish lines. A BHAG engages people—it reaches out and grabs them in the gut. It is tangible, energizing, highly focused. People “get it” right away; it takes little or no explanation.

The moon mission didn’t need a committee to spend endless hours wordsmithing the goal into a verbose, meaningless, impossible-to-remember “mission statement.” No, the goal itself—the mountain to climb—was so easy to grasp, so compelling in its own right, that it could be said one hundred different ways, yet easily understood by everyone. When an expedition sets out to climb Mount Everest, it doesn’t need a three-page, convoluted “mission statement” to explain what Mount Everest is. … Most corporate statements we’ve seen do little to provoke forward movement (although some do help to preserve the core). To stimulate progress, however, we encourage you to think beyond the traditional corporate statement and consider the powerful mechanism of a BHAG. BHAGs are bold, falling in the gray area where reason and prudence might say “This is unreasonable,” but the drive for progress says, “We believe we can do it nonetheless.” Again, these aren’t just “goals”; these are Big Hairy Audacious Goals.