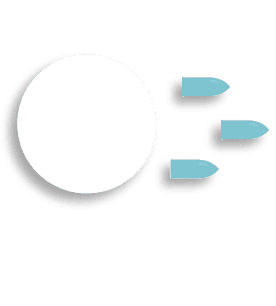 Fire Bullets, Then Cannonballs is a concept developed in the book Great by Choice. First, you fire bullets (low-cost, low-risk, low-distraction experiments) to figure out what will work—calibrating your line of sight by taking small shots. Then, once you have empirical validation, you fire a cannonball (concentrating resources into a big bet) on the calibrated line of sight. Calibrated cannonballs correlate with outsized results; uncalibrated cannonballs correlate with disaster. The ability to turn small proven ideas (bullets) into huge hits (cannonballs) counts more than the sheer amount of pure innovation.
Media and Articles
Video
Expand +
Fire Bullets Then Canonballs
Excerpts from Great by Choice

Picture yourself at sea, a hostile ship bearing down on you. You have a limited amount of gunpowder. You take all your gunpowder and use it to fire a big cannonball. The cannonball flies out over the ocean…and misses the target, off by 40 degrees. You turn to your stockpile and discover that you’re out of gunpowder. You die. But suppose instead that when you see the ship bearing down, you take a little bit of gunpowder and fire a bullet. It misses by 40 degrees. You make another bullet and fire. It misses by 30 degrees. You make a third bullet and fire, missing by only 10 degrees. The next bullet hits—ping!—the hull of the oncoming ship. Now, you take all the remaining gunpowder and fire a big cannonball along the same line of sight, which sinks the enemy ship. You live.

By 2002, the iPod remained a small part of Apple’s overall portfolio, accounting for less than 3 percent of net sales, meriting neither a separate line item in Apple’s financial statements nor a mention in the opening paragraph of the company’s business description. The iPod was a very cool bullet, but a bullet nonetheless.

So, Apple took the next step, launching an online music store and working out a deal with the music industry to offer individual songs at 99 cents. This, too, succeeded, and Apple had more empirical validation. Millions of people would rather buy music than steal it, if easy to access and fairly priced; people were clamoring for iTunes for their Windows-based personal computers; and Windows had an installed base of more than one billion personal computers.

Finally, with all this empirical validation, Apple fired the big cannonball.

The iPod story illustrates a crucial point: a big, successful venture can look in retrospect like a single-step creative breakthrough when, in fact, it came about as a multistep iterative process based more upon empirical validation than visionary genius. The marriage of fanatic discipline and empirical creativity better explains Apple’s revival than breakthrough innovation per se.

The same point holds for Steve Jobs himself. When banished to the high-tech wilderness in 1985 after being ousted from his own company, Jobs never stopped developing, growing, learning, pushing himself. He could have taken his fortune, and retired to a life of ease and comfortable irrelevance. Instead, he launched a new company called NeXT, worked on a new operating system, and became engaged with animated films at Pixar. In the 12 years away from Apple, Jobs had turned himself from a creative entrepreneur into a disciplined, creative company builder. Jobs always knew how to build insanely great products, but he had to learn how to build an insanely great company.