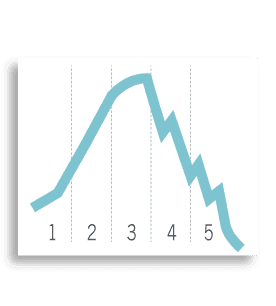 Five Stages of Decline is a concept developed in the book How the Mighty Fall. Every institution is vulnerable to decline, no matter how great. We found that great companies often fall in five stages: 1) Hubris Born of Success, 2) Undisciplined Pursuit of More, 3) Denial of Risk and Peril, 4) Grasping for Salvation, and 5) Capitulation to Irrelevance or Death. Institutions can be sick on the inside and yet still look strong on the outside; decline can sneak up on you, and then—seemingly all of a sudden—you're in big trouble.
Media and Articles
Video
Expand +
Five Stages of Decline
Articles
Expand +
How The Mighty Fall
Excerpts from How the Mighty Fall

In one sense, my research colleagues and I have been studying failure and mediocrity for years, as our research methodology relies upon contrast, studying those that became great in contrast to those that did not and asking, “What’s different?” But the primary focus of our quest had been on building greatness, an inherently bright and cheery topic. … I wanted to turn the question around, curious to understand the decline and fall of once-great companies. I joked with my colleagues, “We’re turning to the dark side.

Great enterprises can become insulated by success; accumulated momentum can carry an enterprise forward, for a while, even if its leaders make poor decisions or lose discipline. Stage 1 kicks in when people become arrogant, regarding success virtually as an entitlement, and they lose sight of the true underlying factors that created success in the first place. When the rhetoric of success (“We’re successful because we do these specific things”) replaces penetrating understanding and insight (“We’re successful because we understand why we do these specific things and under what conditions they would no longer work”), decline will very likely follow.

Hubris from Stage 1 (“We’re so great, we can do anything!”) leads right into Stage 2, the Undisciplined Pursuit of More—more scale, more growth, more acclaim, more of whatever those in power see as “success.” Companies in Stage 2 stray from the disciplined creativity that led them to greatness in the first place, making undisciplined leaps into areas where they cannot be great or growing faster than they can achieve with excellence, or both. When an organization grows beyond its ability to fill its key seats with the right people, it has set itself up for a fall. Although complacency and resistance to change remain dangers to any successful enterprise, overreaching better captures how the mighty fall.

STAGE 3: DENIAL OF RISK AND PERIL.

As companies move into Stage 3, internal warning signs begin to mount, yet external results remain strong enough to “explain away” disturbing data or to suggest that the difficulties are “temporary” or “cyclic” or “not that bad,” and “nothing is fundamentally wrong.” In Stage 3, leaders discount negative data, amplify positive data, and put a positive spin on ambiguous data. Those in power start to blame external factors for setbacks rather than accept responsibility. The vigorous, fact-based dialogue that characterizes high-performance teams dwindles or disappears altogether. When those in power begin to imperil the enterprise by taking outsized risks and acting in a way that denies the consequences of those risks, they are headed straight for Stage 4.

The cumulative peril and/or risks-gone-bad of Stage 3 assert themselves, throwing the enterprise into a sharp decline visible to all. The critical question is, How does its leadership respond? By lurching for a quick salvation or by getting back to the disciplines that brought about greatness in the first place? Those who grasp for salvation have fallen into Stage 4. Common “saviors” include a charismatic visionary leader, a bold but untested strategy, a radical transformation, a dramatic cultural revolution, a hoped-for blockbuster product, a “game changing” acquisition, or any number of other silver-bullet solutions. Initial results from taking dramatic action may appear positive, but they do not last.

STAGE 5: CAPITULATION TO IRRELEVANCE OR DEATH.

The longer a company remains in Stage 4, repeatedly grasping for silver bullets, the more likely it will spiral downward. In Stage 5, accumulated setbacks and expensive false starts erode financial strength and individual spirit to such an extent that leaders abandon all hope of building a great future. In some cases, their leaders just sell out; in other cases, the institution atrophies into utter insignificance, and in the most extreme cases, the enterprise simply dies outright.