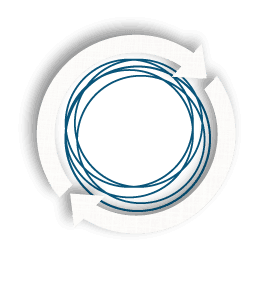 The Flywheel effect is a concept developed in the book Good to Great. No matter how dramatic the end result, good-to-great transformations never happen in one fell swoop. In building a great company or social sector enterprise, there is no single defining action, no grand program, no one killer innovation, no solitary lucky break, no miracle moment. Rather, the process resembles relentlessly pushing a giant, heavy flywheel, turn upon turn, building momentum until a point of breakthrough, and beyond.
Media and Articles
Video
Expand +
The Flywheel Aligning Your Organization with Its Vision
Articles
Expand +
Bigger, Better, Faster The Flywheel Effect Good to Great Hitting the Wall: Realizing that Vertical Limits Aren't Manager's Journal: High Returns Aid Low Expectations The Secret Of Enduring Greatness
Excerpts from Good to Great

Then, at some point—breakthrough! The momentum of the thing kicks in in your favor, hurling the flywheel forward, turn after turn ... whoosh! ... its own heavy weight working for you. You’re pushing no harder than during the first rotation, but the flywheel goes faster and faster. Each turn of the flywheel builds upon work done earlier, compounding your investment of effort. A thousand times faster, then ten thousand, then a hundred thousand. The huge heavy disk flies forward, with almost unstoppable momentum.

Now suppose someone came along and asked, “What was the one big push that caused this thing to go so fast?” You wouldn’t be able to answer; it’s just a nonsensical question. Was it the first push? The second? The fifth? The hundredth? No! It was all of them added together in an overall accumulation of effort applied in a consistent direction. Some pushes may have been bigger than others, but any single heave—no matter how large—reflects a small fraction of the entire cumulative effect upon the flywheel. … Here’s what’s important. We’ve allowed the way transitions look from the outside to drive our perception of what they must feel like to those going through them on the inside. From the outside, they look like dramatic, almost revolutionary breakthroughs. But from the inside, they feel completely different, more like an organic development process.

Picture an egg just sitting there. No one pays it much attention until, one day, the egg cracks open and out jumps a chicken! All the major magazines and newspapers jump on the event, writing feature stories—“The Transformation of Egg to Chicken!” “The Remarkable Revolution of the Egg!” “Stunning Turnaround at Egg!”—as if the egg had undergone some overnight metamorphosis, radically altering itself into a chicken. But what does it look like from the chicken’s point of view? It’s a completely different story. While the world ignored this dormant-looking egg, the chicken was evolving, growing, developing, incubating. From the chicken’s point of view, cracking the egg is simply one more step in a long chain of steps leading up to that moment—a big step, to be sure, but hardly the radical, single-step transformation it looks like to those watching from outside the egg. It’s a silly analogy, granted. But I’m using it to highlight a very important finding from our research. We kept thinking that we’d find “the one big thing,” the miracle moment that defined breakthrough. We even pushed for it in our interviews. But the good-to-great executives simply could not pinpoint a single key event or moment in time that exemplified the transition.

We found a very different pattern at the comparison companies. Instead of a quiet, deliberate process of figuring out what needed to be done and then simply doing it, the comparison companies frequently launched new programs—often with great fanfare and hoopla aimed at “motivating the troops”—only to see the programs fail to produce sustained results. They sought the single defining action, the grand program, the one killer innovation, the miracle moment that would allow them to skip the arduous buildup stage and jump right to breakthrough. They would push the flywheel in one direction, then stop, change course, and throw it in a new direction—and then they would stop, change course, and throw it into yet another direction. After years of lurching back and forth, the comparison companies failed to build sustained momentum and fell instead into what we came to call the doom loop.